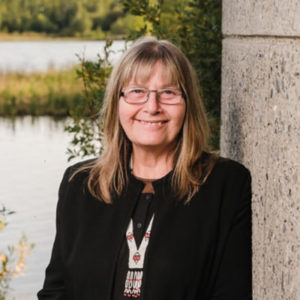 Arlene Hache is well known as an advocate for social change and as a result of her work was awarded the Order of Canada in 2009 and the Queen Elizabeth II Diamond Jubilee Medal in 2012. She was a founding member of the Yellowknife Women’s Society who established the Yellowknife Women’s Centre in 1990 and the Centre for Northern Families in 2005. Arlene led the agency as its Executive Director for more than 25 years, setting up an emergency shelter for women who were unhoused and experiencing violence; a daycare and a broad range of family support programs. She also worked with Dr. Ewan Affleck and Nurse Practitioners to embed a walk-in medical clinic into the Centre so women in the shelter could have easier access to health services. She also was a founding member of the Coalition Against Family Violence and the Yellowknife Housing Coalition. Arlene retired from the position in 2012 to attend Royal Roads University where she obtained a Master’s Degree in Leadership.

Subsequently, Arlene became a key lead in expanding the service scope of an Indigenous Hub for the District of Temiskaming in Northern Ontario. Arlene co-authored an Indigenous Cultural-linguistic Competency Framework and established an Elders Council with members from each First Nation in the Territory and the Temiskaming Métis Community Council to guide its implementation. She co-developed and implemented an Indigenous Women in Mining pre-employment program that included a personal development component designed to address trauma related to colonization. Arlene is a published author and has participated on several research teams that gives voice to people with lived experience of trauma and homelessness. She has served on several national Canadian boards addressing issues related to mental health and homelessness including the Mental Health Commission of Canada and the national Advisory Committee on Homelessness chaired by the Honourable Adam Vaughan. Arlene currently sits on the National Poverty Council, the Boards of Directors of the Canadian Alliance to End Homelessness and the Governing Council of the Huairou Commission.